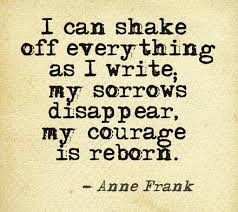 Writing has saved me $1000’s in conventional therapy.

Yesterday, I recognized that it was the first weekend where I was not in absolute pain because I know he is with her.  I’ve been ok, and I guess it’s because I know the man that’s with her is not the man I knew and love.

My friend Megan wrote a blog about it not being the pain she fears but the void beyond the pain.  If it’s over, what is there but emptiness where all that emotion was?  Yes…thus my poem a few blogs back called The Void.  (https://learningtolivelikewaterblog.com/2015/10/29/the-void/   Some days it’s larger, some smaller.  Some days I can ignore it, walk by it, some days I fall in and disappear.

I also have realized that what I miss is the every day connection. I miss him being part of my life every day and being part of his.  I don’t like a man who changes his face for everyone he meets, but I have always seen S’s soul, not his face, and it’s always been his soul that I love, and that I know.  I see the inner child, just wanting to be loved because he exists, like every other child.  I can still do that.

He tried occasionally, to convince me he was a bad evil person. I always said, “I see your soul S.  I see your soul and I like what I see.  I don’t know what to tell you.”  Imagine being so convinced you don’t deserve love that you try to convince others not to love you.

I wish he and I could just talk, and be friends, without the sexual tension that’s between us.  But it always goes there, and for me that comes with attachment, and besides, I know he can turn on me on a dime, evidenced by his texting me at 4 am, and devastating me 6 hours later.  That’s not a friend.  I don’t even know what to call that.  It’s been 4 weeks, this weekend.  The wound at times is fresh, as if it just happened.  Then I remember how every time I’ve spoken to him since it has not ended well.  He has told me he cares for me.  Whatever he feels only causes me pain.  I can’t go there again.

The man I saw last week, Jim, sent me two texts yesterday.  The first was “Happy Halloween 300 times.”  which I didn’t understand at all. Like I said, I don’t get his sense of humor.  Then later he sent one saying he enjoyed my company the night before very much.  And I thought “How?  You didn’t make even the smallest effort to find out who and what I am.”  I didn’t answer either one.  I didn’t know what to say.  I was afraid if I said I was sorry, but I didn’t feel any connection, maybe we should just let it go, that he would call me, and I didn’t want to deal with it.  I chose to just ignore the texts, and hope it just fades away.  We’ve only been out 3 times.  There is no attachment.

And then there’s A.  Always there for me, always steady.  Never anything but loving and caring and honest.  Yesterday he sent me a pic, and there was a red truck in it. His truck, I thought, was black.  I asked him if he got a new truck when I disappeared.  (Which I did in August and September, just cut him off without warning to focus my attention and energy on my relationship with S, which was unraveling then.  I think even then, S was in touch with her, which was why we were unraveling.) Anyway A, answered about the truck saying it wasn’t his, but then said, “I’m so glad to have you back.  Don’t fucking disappear again!”  He went on to say “Fall madly in love, get married, but don’t disappear!”  I told him I wouldn’t, ever.  And that I didn’t want to get married either.  Just to have a loving, monogamous, extraordinary relationship with someone.

And so…I continue onward.  Feeling like S and I have unfinished business, business that will remain that way for the foreseeable future, at time nagging at me, at times I can just ignore it.  Hopeful that perhaps there is someone else out there that I can love as intensely as I loved him.  Someone who is also capable of that depth of emotion.  Clearly S, in his present state is not, nor wants to be.